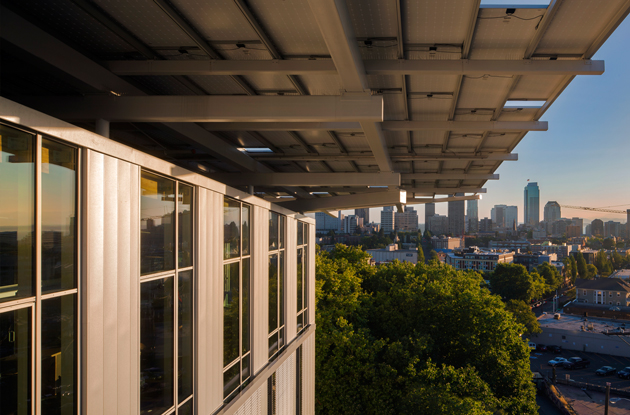 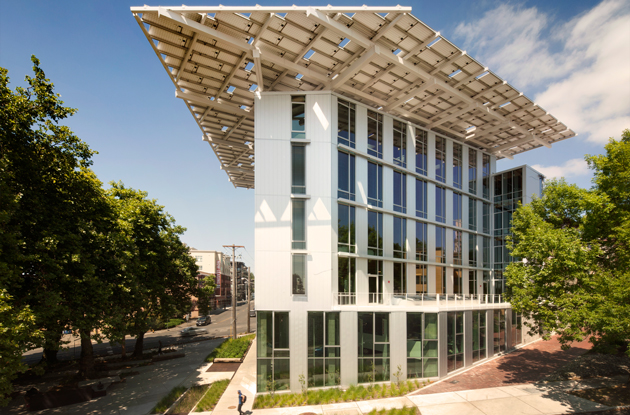 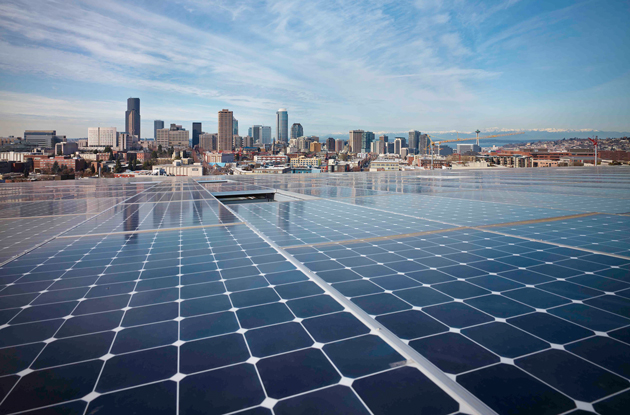 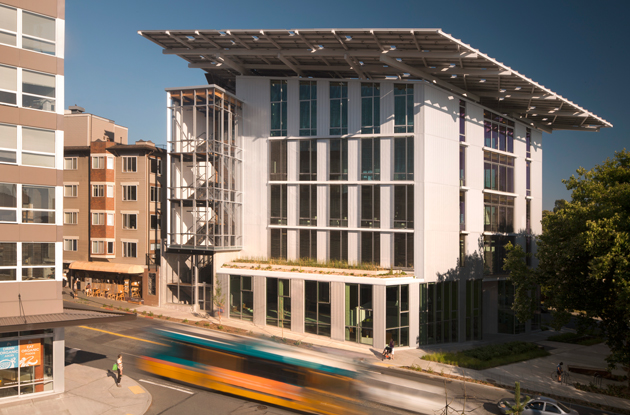 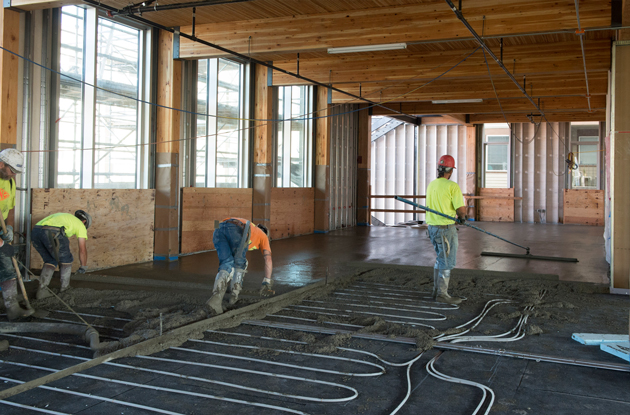 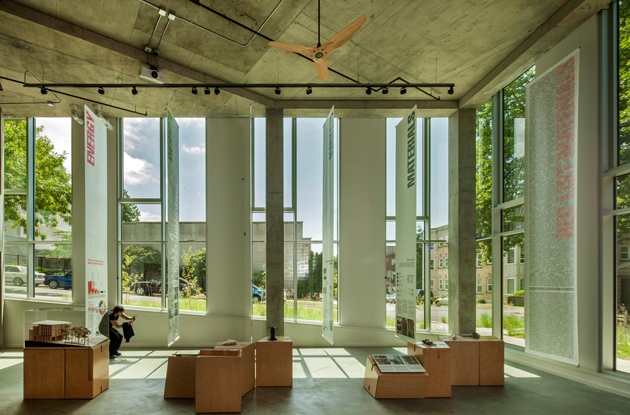 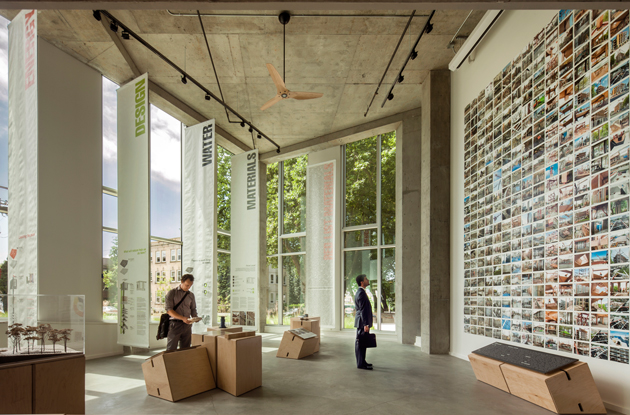 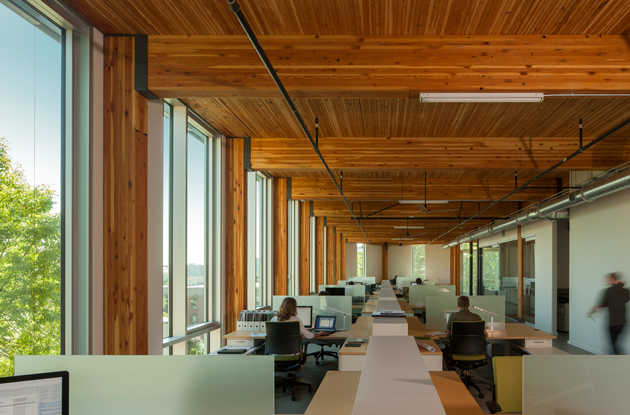 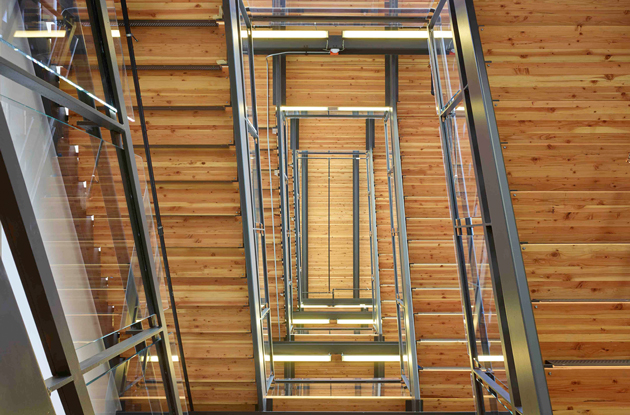 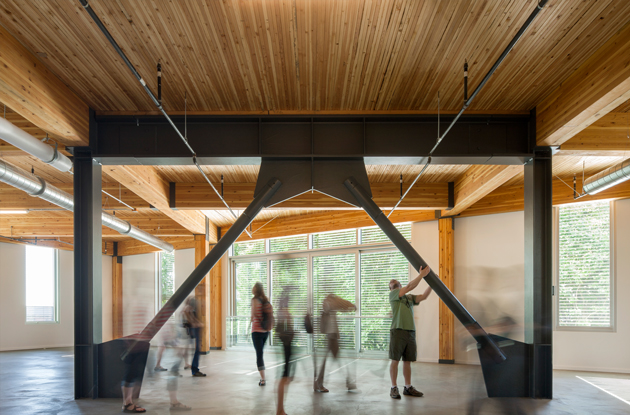 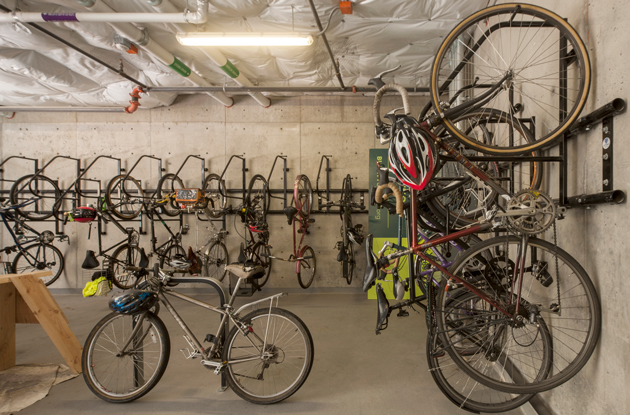 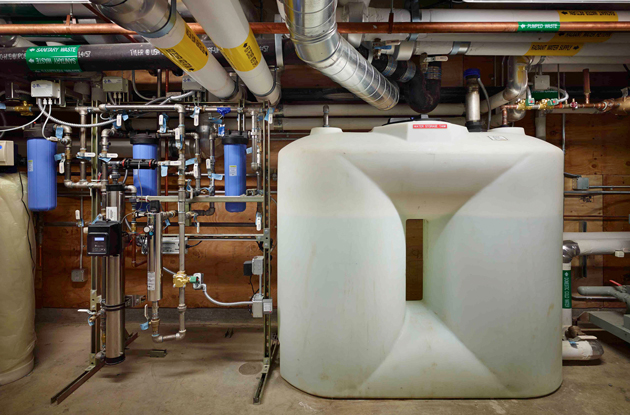 Buildings account for an estimated 39% of carbon dioxide emissions, 65% of waste and 70% of electrical use in the United States. In the Pacific Northwest, a changing climate is already shifting our use of water, energy and other natural resources. To address this reality, the Bullitt Center in Seattle, WA is demonstrating what is possible today and inspiring tomorrow’s leaders to go even farther.

As the first urban structure of its kind, the Bullitt Center is inherently about learning and discovery.
From building design and the interactive resource center to the new community green-space, the Bullitt Center is a place for people to gather and learn about green building and urban sustainability. And it serves as a highly visible example of what’s possible when a team of people come together to advance uncommon wisdom. Features shaping the Bullitt Center include the following:

• LIVING BUILDING: The 6-story, 50,000 sq. ft. building is the nation’s first urban mid-rise
commercial project to attempt the rigorous goals of the Living Building Challenge, the most
ambitious benchmark of sustainability in the built environment.

• TEACHING BUILDING: The lower floor of the building, fronting 15th Avenue and the new
park at McGilvra Place, houses the Center for Integrated Design. Programmed by the
University of Washington’s Integrated Design Lab, the Center features an open classroom,
exhibition space and a research laboratory dedicated to the training of pioneers who will
lead our green economy.

During its first 12 months,the building used 147,260 kWh of electricity compared to a baseline of 593,891 kWh for a similar building built to local code (Source: Seattle City Light). During the same period, the Bullitt Center generated 252,560 kWh of clean, renewable energy from the solar panels on its roof. Therefore the building has demonstrated to be net positive energy, not just net zero.


SOLAR
To achieve “net zero energy,” the Bullitt Center will generate as much electricity as the building requires in a year from its rooftop solar power system. During sunny summer months, the photovoltaic (PV) array will produce more electricity than building occupants use; in the gray winter months, it will produce less.

570 photovoltaic panels cover the Bullitt Center roof, each with a rated capacity of 425 watts, meaning the total array will generate 242,000 watts (242 kilowatts) of power at noon on a sunny day. From analysis of the actual sunlight expected to hit the panels (including dim sunlight on cloudy days), we estimate the solar roof will generate approximately 230,000 kilowatt-hours (KWH) of energy in an average year.

In order to maximize solar exposure, the roof of the Bullitt Center looks like the flat mortar boards worn at graduation ceremonies. A steel and aluminum racking system allows the panels to extend beyond the walls of the building and was designed with flexibility in mind. As part of the Living Building Challenge, the Bullitt Center will meter its energy production and consumption on a continuous basis and show the results in its lobby and on the Internet.

Tenants are allocated an energy budget based on the percent of the building they occupy. Tenants that remain within their budget pay nothing for electricity.

WATER
Clean rainwater falling on the Bullitt Center’s roof through gaps between the PV array is carried by downspouts to a 56,000-gallon (appox 212,000 litres) cistern in the basement. The system supplies all non-potable fixtures in the building including toilets, hose spigots, and irrigation systems.

In addition, the system has been designed and constructed to meet all potable water needs for the building once it is fully permitted. Rainwater will pass through a series of filters to remove impurities, an ultra-filter that is so fine that it takes out viruses, and an ultraviolet disinfection system. Until approved, the system will be continually tested and monitored, and potable water will come from the city's water supply system.
Water for toilet flushing is nearly eliminated in this building by composting human “waste” on-site using 10 large composting units in the building’s basement.

Foam flush toilets using less than a cup of rainwater and natural soap convey solids and liquids through piping to the basement. Wood chips are added to the composting units as an additional carbon source, and to help manage moisture levels. The compost is rotated about once a week and air is circulated through the composters to help accelerate the composting process.This valuable resource will be used as a soil amendment.

The building’s greywater – which comes from sink and shower drains – will be filtered, stored, and then treated in a constructed wetland (visible on the building’s second-story roof by Madison Street). Once treated and cleaned to City and State-approved standards, it will be infiltrated into a green planting strip on 15th Avenue, where it will ultimately replenish the natural aquifer.

MATERIAL STRATEGY
As required by the Living Building Challenge, the Bullitt Center worked to weed out more than 350 common toxic chemicals from materials used in the building. Throughout the material selection process, the Bullitt Center team worked with manufacturers to identify the greenest and healthiest products such as:

- Lead-free valves and fixtures throughout the building, including non-potable systems such as on the geothermal heat exchanger and in the fire-suppression systems.
- Phthalate-Free Air Barrier (Phthalates are common plasticizers that are used in a variety of building products, including PVC and building membranes).
- EPDM couplings throughout the building, even on the gasket to the cistern manhole cover.
- No PVC wire installed.
- Eco-Based Insulation Adhesives (low or zero VOC's content). Insulation layers are held together by a plant-based binder.

BUILDING DEMOLITION AND SALVAGE
A small one-story bar and restaurant, along with a paved surface parking lot, formerly occupied the site of the Bullitt Center. Typically, developers are not allowed to remove pre-existing structures prior to issuance of a Master Use Permit. As a result, many existing structures are simply demolished in order to minimize impact on the overall project schedule and associated costs. The Bullitt Center team worked with City regulators to secure approval for deconstruction and material reuse well in advance of the final permit to integrate material recycling and salvage into the process.

NO PARKING SPACES
With onsite parking for bicycles only, the Bullitt Center is the City’s first commercial building to take advantage of legislation focused on designated Urban Villages that are well served by public transportation. In an effort to promote car-free living and reduce the environmental and social impact of single occupancy vehicle use and traffic congestion, the Bullitt Center chose to construct a garage for bikes instead of cars, and developed a multi-modal transportation plan to guide tenant behavior.

FSC CERTIFIED TIMBER
100% of the wood in the Bullitt Center is certified to standards set by the Forest Stewardship Council (FSC).

LOCAL GREEN ECONOMY
A curtain wall (window) system engineered by the German company, Schüco, met the high-performance needs of the Bullitt Center design, but the product was only available in Europe. In a remarkable example of creating real change, a partnership was established between Schüco and Goldfinch Brothers, a family-owned company based in Everett, WA. Goldfinch Brothers developed a licensing agreement with Schüco to fabricate, distribute, and install Schüco products in the US.