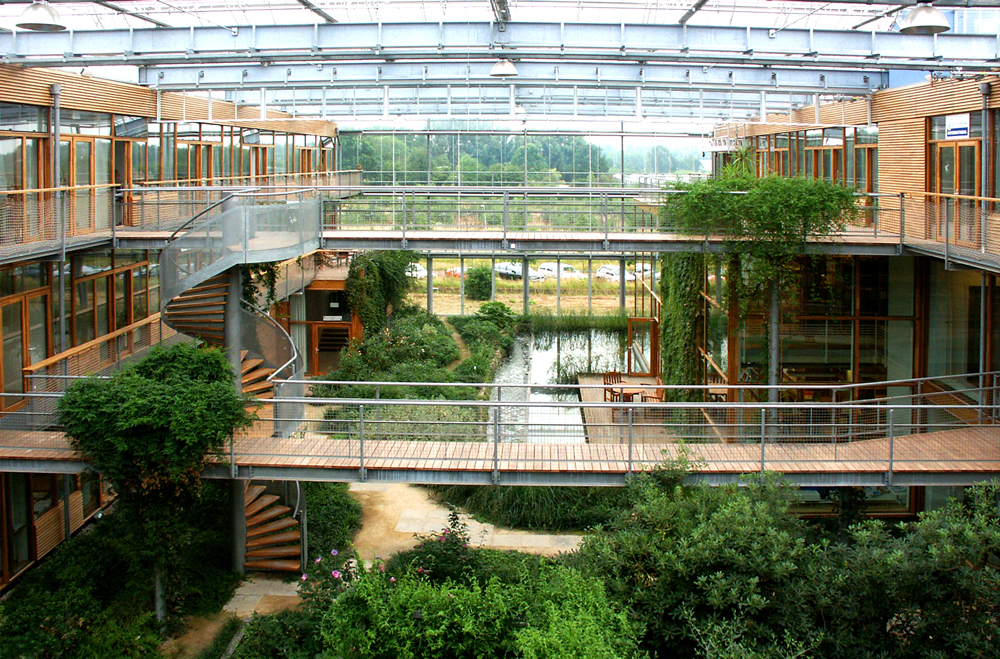 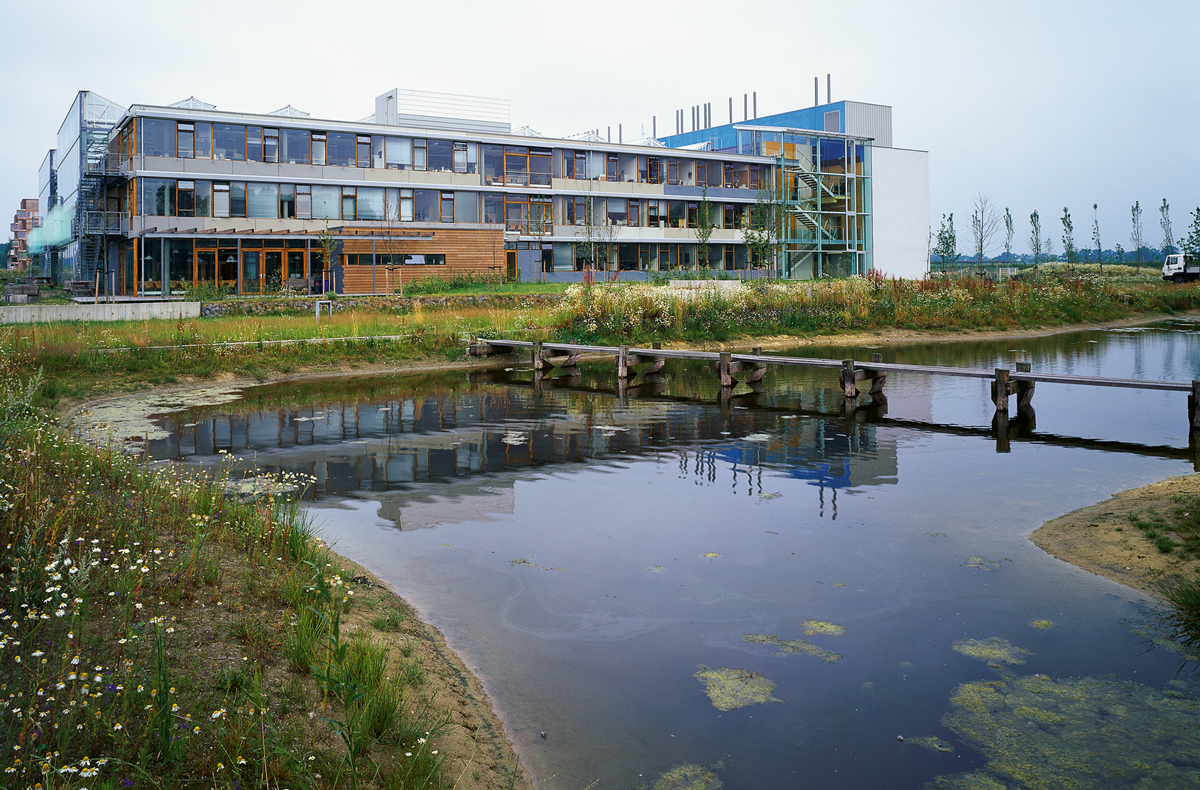 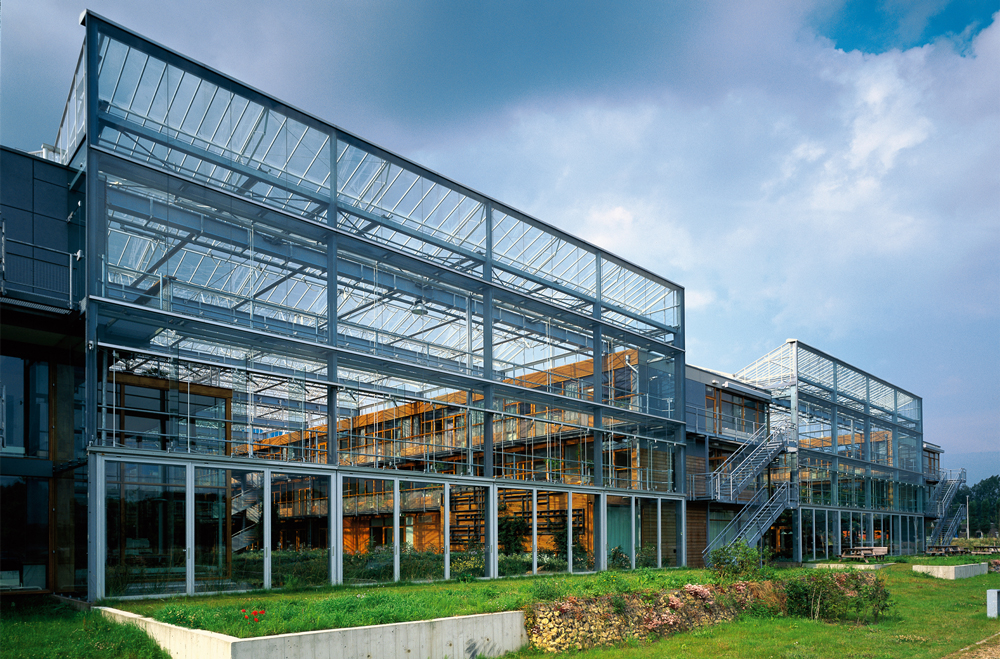 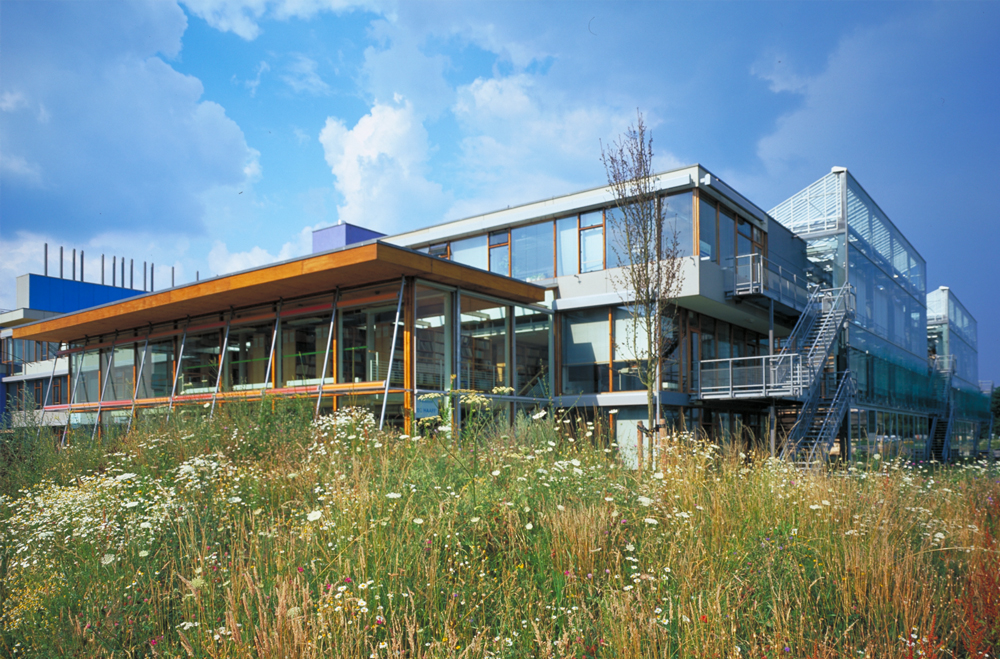 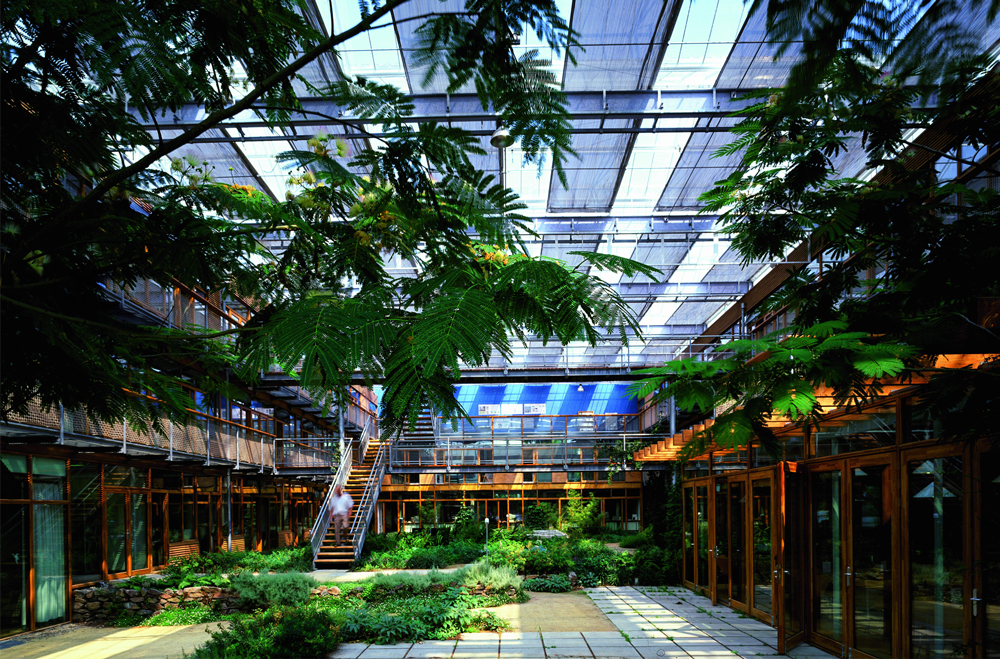 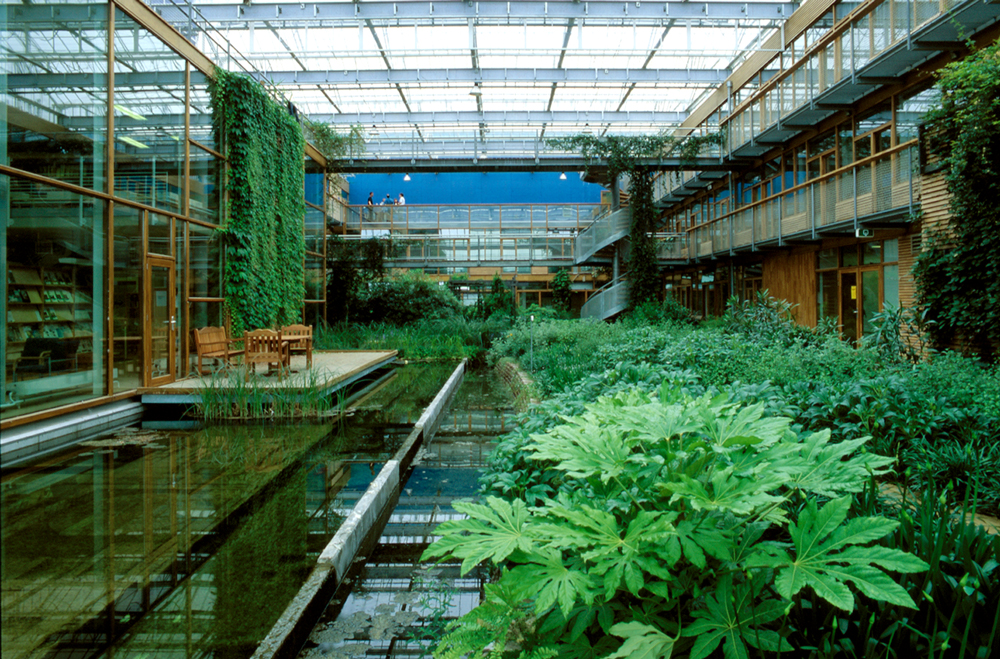 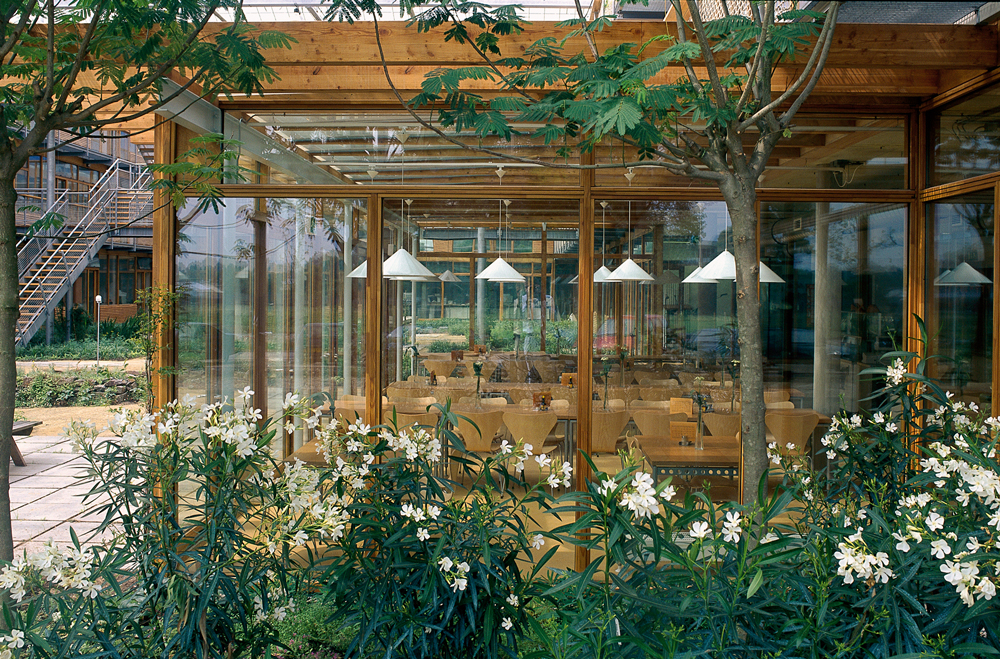 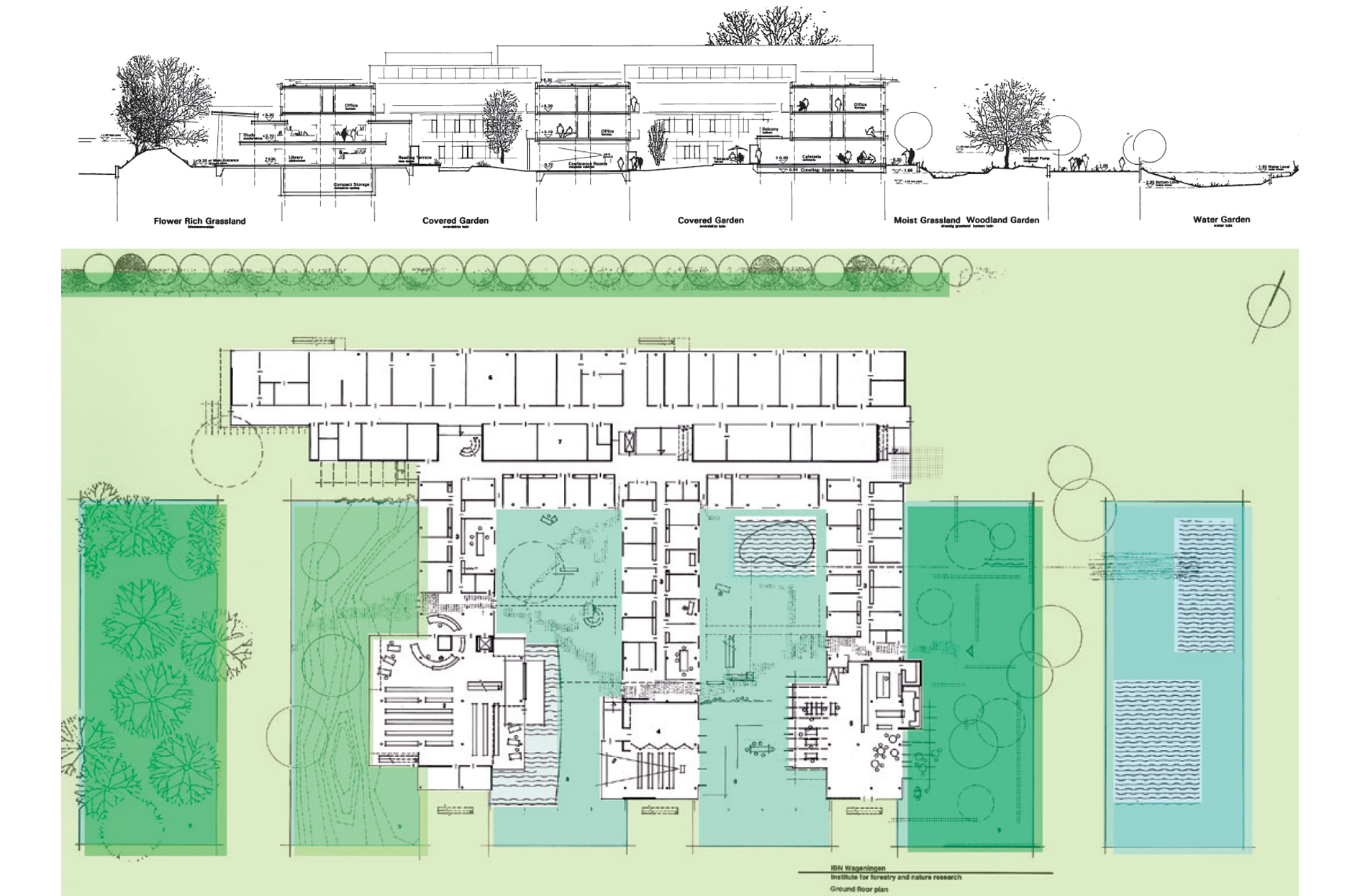 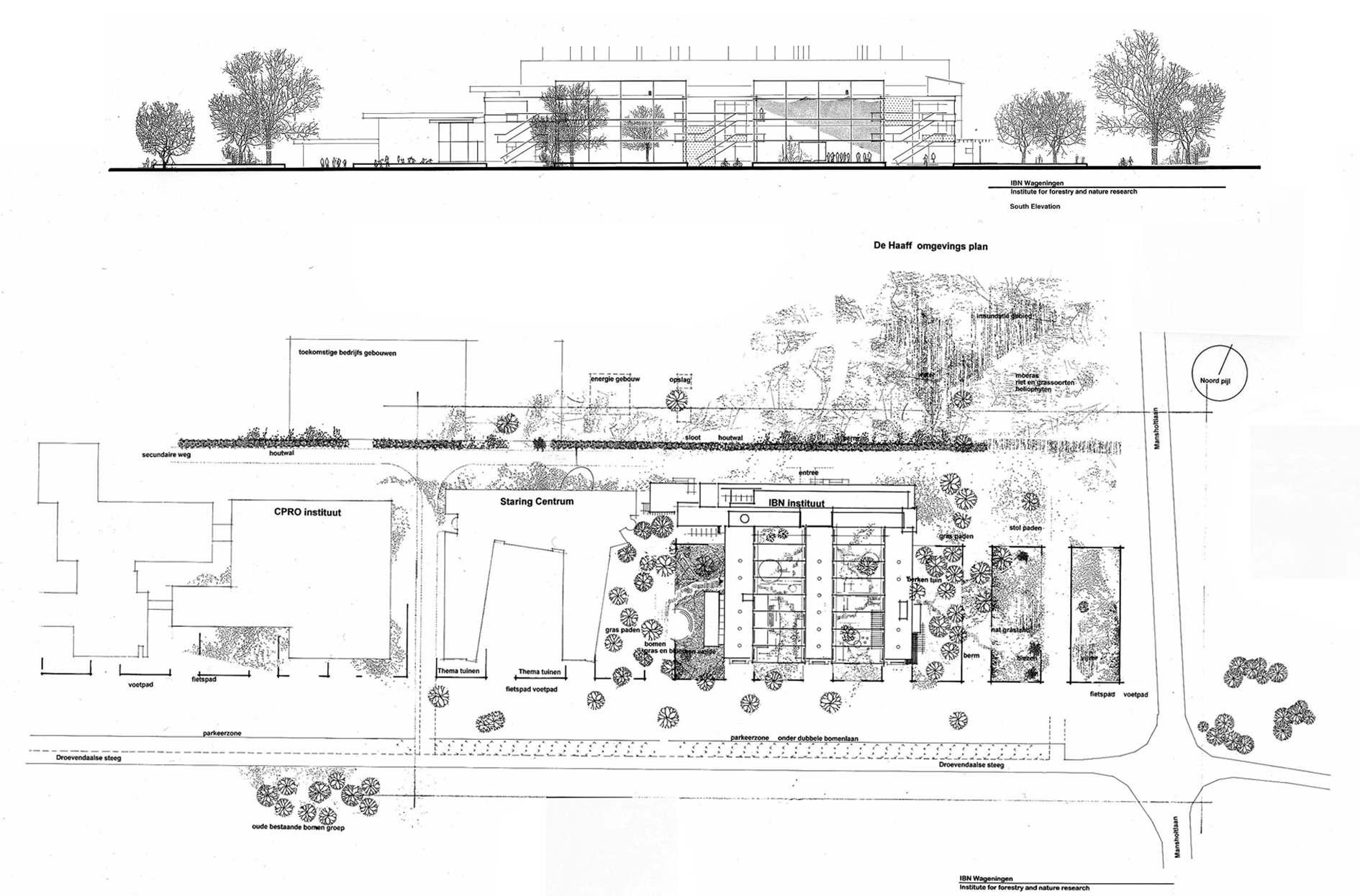 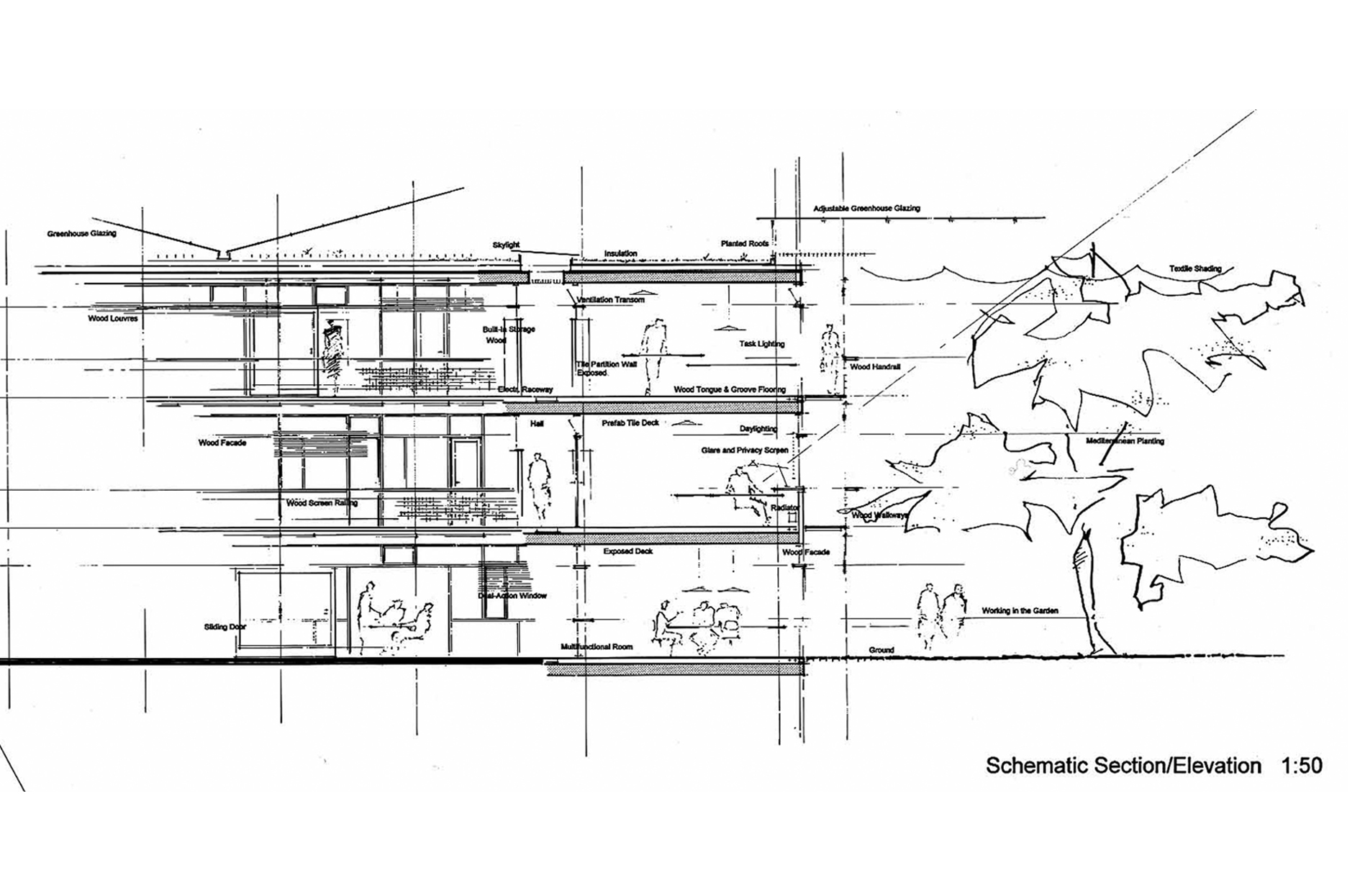 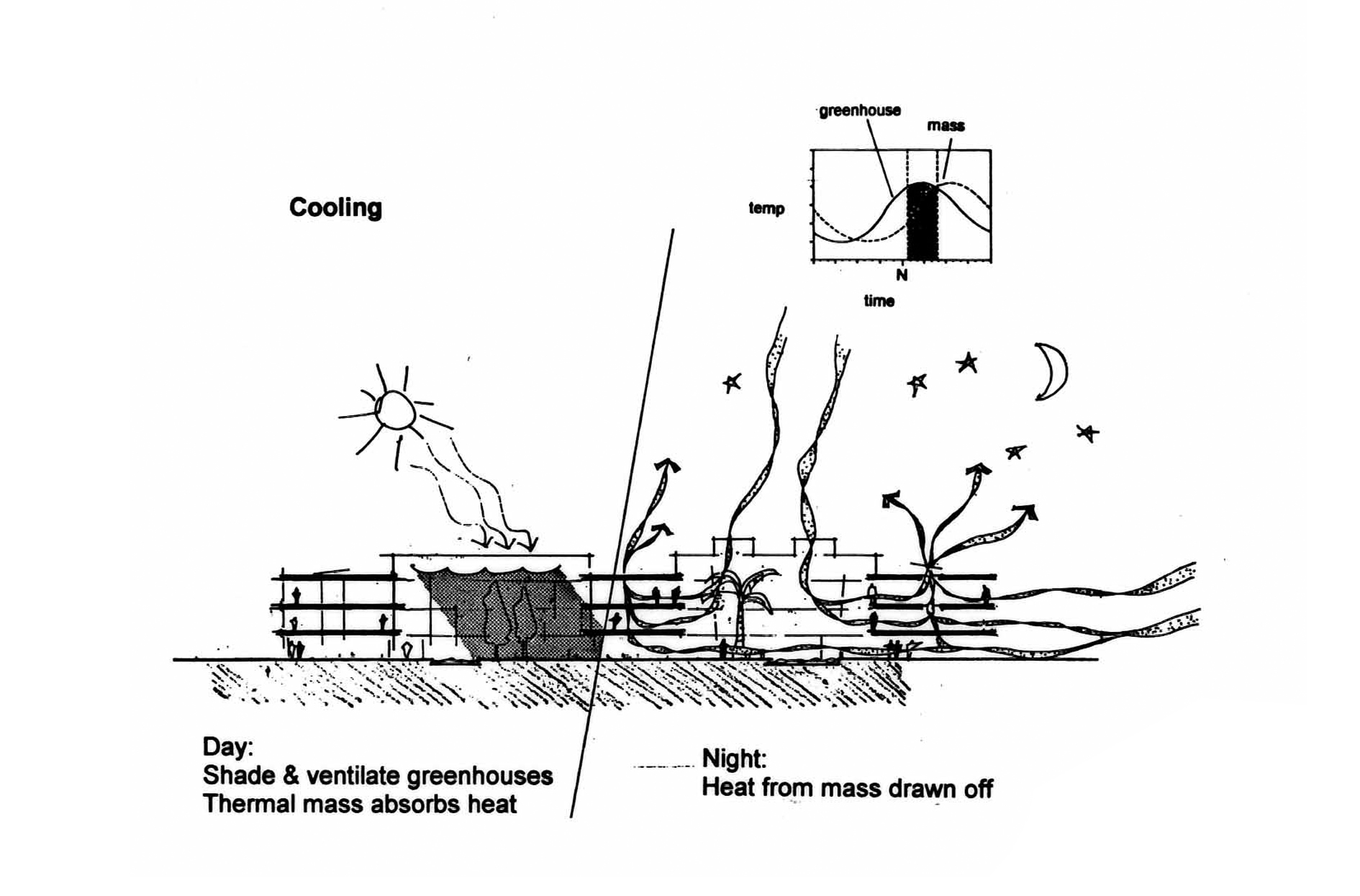 The new laboratory and administration building for the Institute for Forestry and Nature Research – now Alterra – in Wageningen, The Netherlands, was a European Union pilot project for ecological investigation into building. In a cooperative venture between the Ministry of Agriculture, Nature, and Fishery and the Ministry for Housing, Planning, and Environment, the project analyzed planning, construction, and subsequent occupation and followed the motto of human and environmentally friendly building for the future, in the spirit of the Rio de Janeiro Summit. The project provided for a maximum reduction of carbon dioxide emissions; furthermore, the building was to be constructed within a standard budget, to demonstrate that durable and sustainable building strategies can be realized without inordinate investment.

At first glance, the site made available – over-fertilized, nutrient-exhausted agricultural land north of the university town – seemed inappropriate for a project of this nature, offering exceptional challenges to experts involved in sustainable landscape design and other ecological aspects of the project. Instead of attempting a re-naturalization – in the sense of making a wild, or pseudo-natural landscape – a design strategy was developed that drew on the few remaining ecological qualities of the landscape to create a diverse new habitat with vegetation which could sustain insects and animal species and be hospitable to the organizations staff. Elements such as dry-stone walls, scattered tree groves and alleys, hedges, berms, ponds, swamps, and water channels were introduced, creating intricate, varied micro-climates and restoring delicately balanced ecosystems.

The new building was designed not to dominate its rural setting, but to embrace the landscape, with all workplaces in direct contact with indoor and outdoor gardens. Two indoor gardens provide the focus for daily activities, and function as both test-beds and informal meeting areas for researchers; an integral component of the energy concept, they serve as the lungs of the building, improving the performance of the external envelope.

The project was realized within a standard budget demonstrating that durable and sustainable building techniques can be applied without additional costs.

The design brief demanded that all materials be ecologically sound, and promote rational use of energy. The deliberate aesthetic imperfection is an appeal to an unmediated, primarily sensory experience of architecture. The project was realized
within a standard budget demonstrating that durable and sustainable building techniques can be applied without additional costs.

Highly flexible - capable of adapting to the changing requirements of the Institute and promoting self-expression and self-determination in occupant staff, the building has a maximum of pre-fabricated systems and elements, which have considerable environmental advantages over labor-intensive, handcrafted construction products: first, industrial products are subject to continual refinement, with a view to achieving the most favorable relationship between resources and performance; second, serial production is generally associated with optimum manufacturing conditions and minimum waste; third, market forces tend to ensure a good price-to-quality ratio.

For the interior winter gardens, Behnisch Architekten chose to use standard, mass-produced roofs for horticultural greenhouses, costing 75% less than custom-made roofs. The degree of standardization of the industrial roof components – together with ventilation openings and tailor-made, adjustable sun-shading devices – result in a near-optimal relationship between resource consumption and product performance.

Traditionally, window frames consist of galvanized steel with a considerable proportion of extruded aluminum; dialogue and collaboration with a manufacturer led to the development of new, intricately folded, galvanized-steel profiles that do not require aluminum for this project. They are now offered as standard products by the manufacturer, and fall within the same price range as conventional frames.

The production, management, and harvesting of timber is a major field of research at the institute. Indigenous species are used throughout the building for facades, handrails, furniture, and flooring. Due to woods low thermal conductivity, it always feels warm to the touch; because it is generally treated with vegetable oils, it also provides a stimulus to our sense of smell.

Due to these and other factors, early studies considered timber for the primary structure, however financial limitations led ultimately to an exposed in-situ concrete system. That design decision, though ideal in terms of thermal capacity, makes much higher demands on the environment. Timber was used for the façades. 

Off-cuts, normally treated as waste, were used in glue-lam elements to create visually appealing and highly tactile mullions and transoms, as well as a unified curtain-wall system. Detailing of existing, standard Dutch timber facades was improved upon, resulting in various production innovations, including insulation with recycled cotton products.

Explanation of the ENERGY CONCEPT, by Hans Erhorn

The building was planned as a low-energy structure with excellent thermally insulated skin. The atriums are one of the main pillars of the energy concept. The building design allows for all-year-round use of the multi-functional atrium. Heating was only required in the main functional areas, i.e. excluding the atriums. High-grade heat-insulating glass offered the best solution for the office façade, while super-glazing systems were used on the north side. The atrium roof zone was executed as a single-glazed structure with temporary heat insulation.

THE ATRIUMS
The atriums play a very important role in the energy-saving concept. During the winter, their double-buffer effect minimises energy use: the loss of heat through the façade is reduced, and fresh air destined for the offices, etc. is pre-warmed. As the atriums provide wind protection, pleasant conditions can be expected there almost all year round.

The atriums can be intensively ventilated during the summer months, especially at night, thus activating the building mass and generating a balanced room climate. The temporary heat insulation is designed to provide solar protection, too, utilizing systems tried and tested in standard greenhouses. This concept makes it possible to maintain a maximum temperature of 28°C during the summer months.

LABORATORY WINGS
The energy consumption of the laboratories is highly influenced by the ventilation system. The aim here has been to optimise both the design and the dimensioning of the system. All the supply and extract air is regulated via the roof of the north-facing laboratories. Direct heat recovery is used here. Each room has its own vertical shaft in the corridor zone Air-conditioning units are installed exposed on the ceilings, permitting night cooling during the summer. The system was not designed for an absolute maximum requirement, but for one that was considered adequate and based on realistic expectations.

THE OFFICE WINGS
Two thirds of the façade area of the office wings are taken up by the atrium. The rooms are supplied with fresh air through the windows. As the facades facing the atrium are not exposed to wind pressure, an exhaust-air extractor, which operates on sub-atmospheric pressure to ensure a flow of air through the office rooms, is installed in the middle of each office wing. Further saving is achieved by the use of heat recovery. The heating-energy requirement of these areas is well below 30kWh/m3. Not requiring weather protection, technical demands on the façade were considerably reduced.
During the summer months, the office temperatures can be kept to a comfortable. Air-conditioning is not necessary.

THE COOLING CONCEPT
To provide heat-protection during the summer months, a solution was found similar to that allowing for the efficient use of heating energy. Optimisation calculations showed that cooling the building mass with night air obviated the need for mechanical cooling. Using local sun shading to prevent glare in the atriums and by providing adequate lateral ventilation in the atrium roof zone, the temperature in these areas can be kept to a thermally acceptable level. During the summer an air-channeling system and additional ventilation openings cool the building mass by providing two air changes per hour.

THE DAYLIGHT CONCEPT
All workrooms have window openings providing illumination from the outside or from the central atrium. The building has large expanses of glazing in the office rooms to the atrium to ensure an abundant supply of daylight. To improve the energy balance, the north façade has been partially executed as a transparent heat-insulation system, ensuring that daylight penetrates the rooms to a depth of approx. 7m.

GLARE PROTECTION AND SUN SHADING
The windows are equipped with glare protection and solar-shading to ensure visual comfort and reduce excessive solar gain. The glare protection system, which is optimally designed to reduce cooling loads and minimise the danger of over-heating, operates in relation to the exposure to solar radiation on the outside and the quantity of daylight inside the rooms.