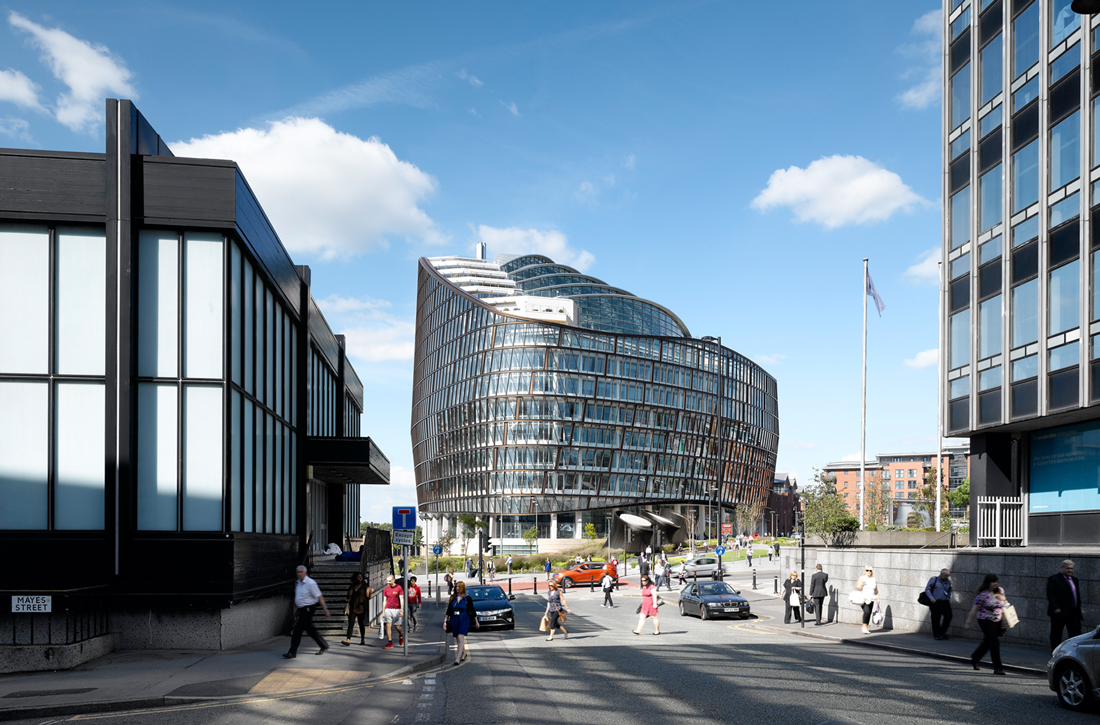 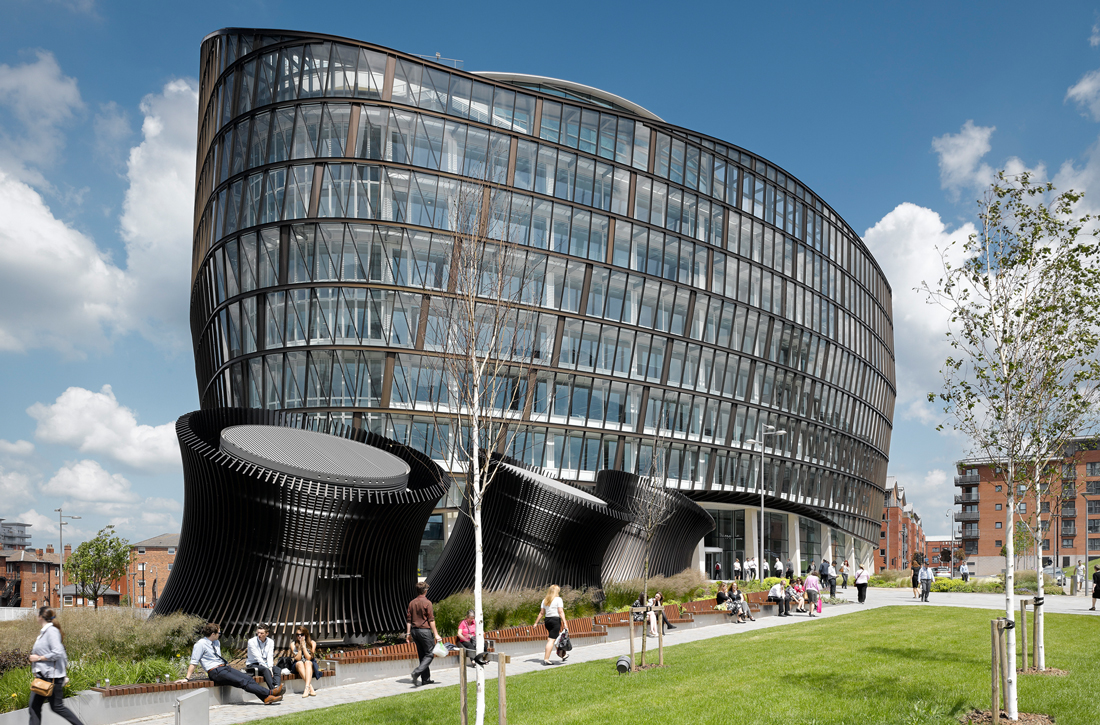 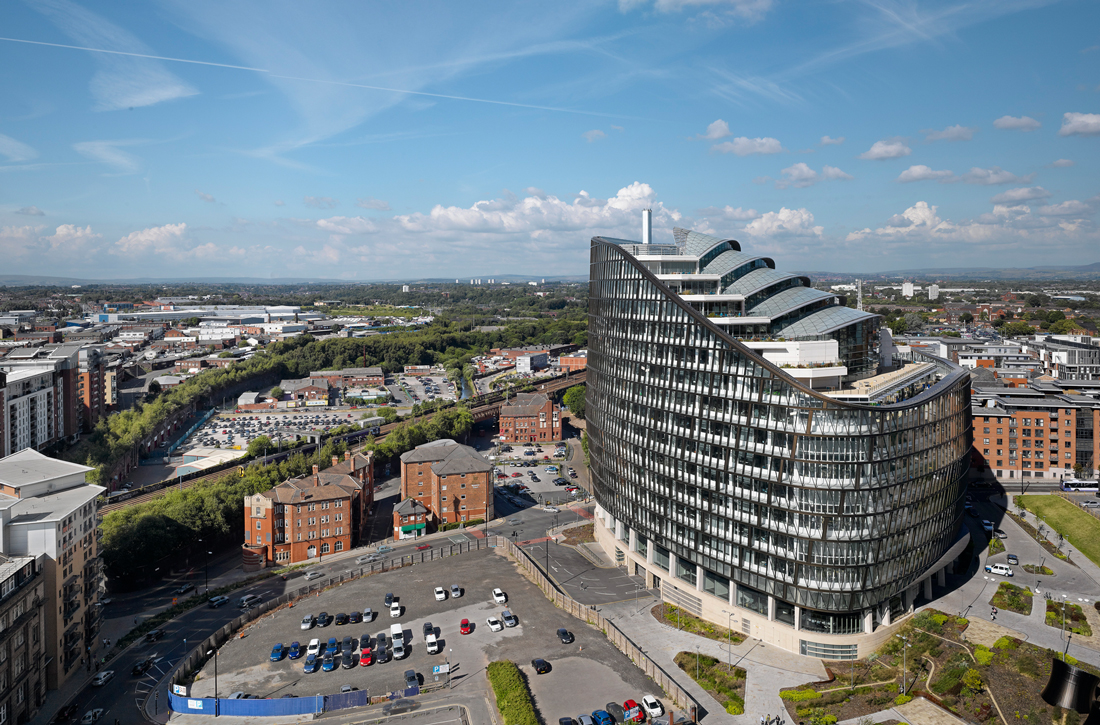 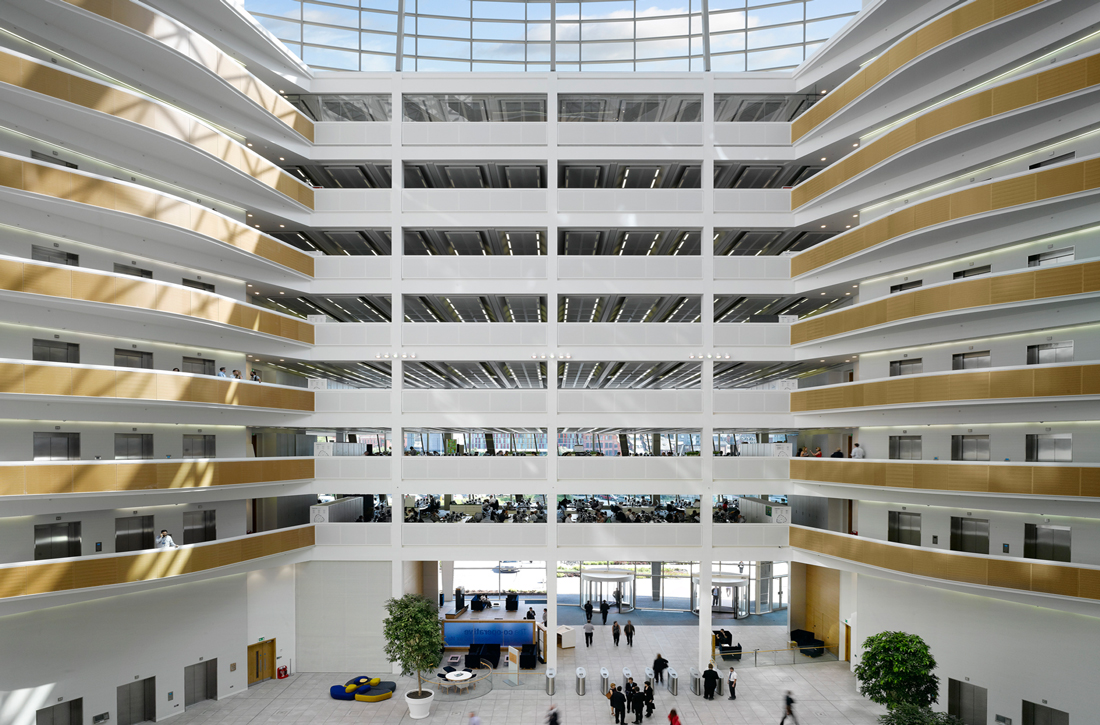 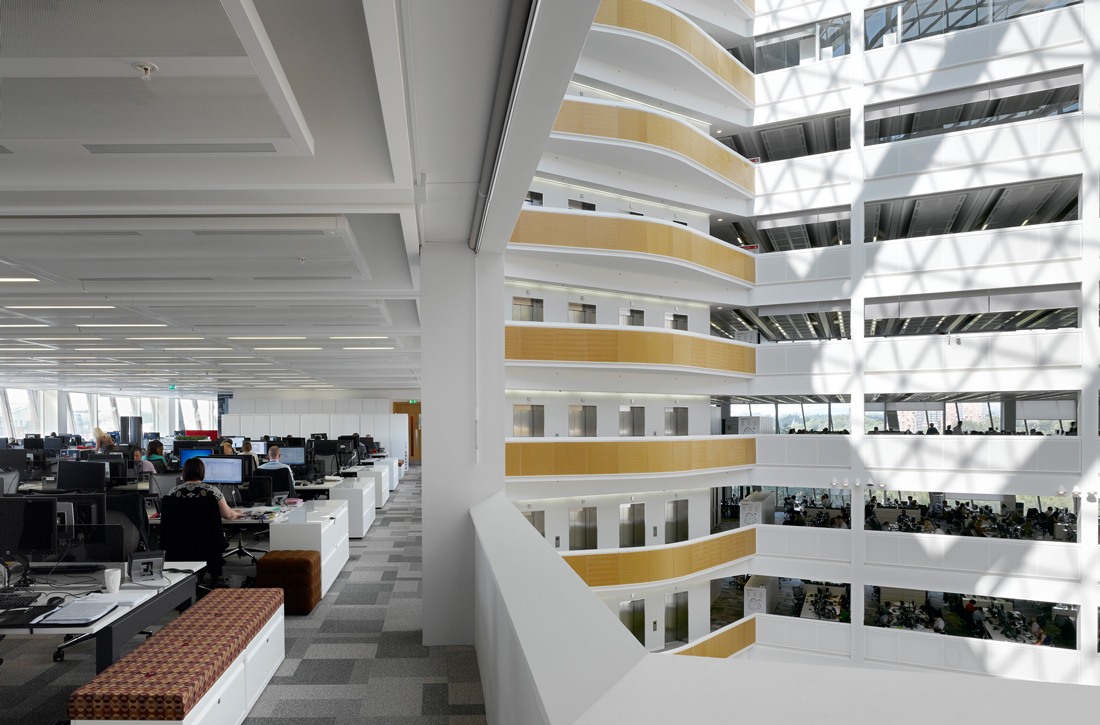 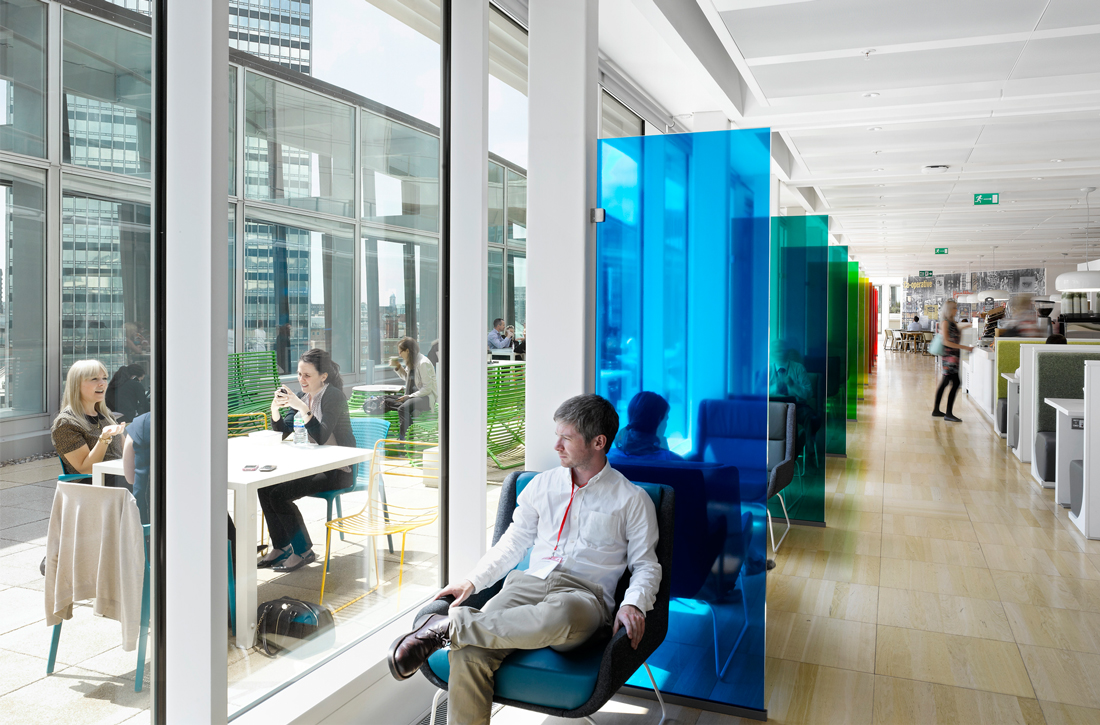 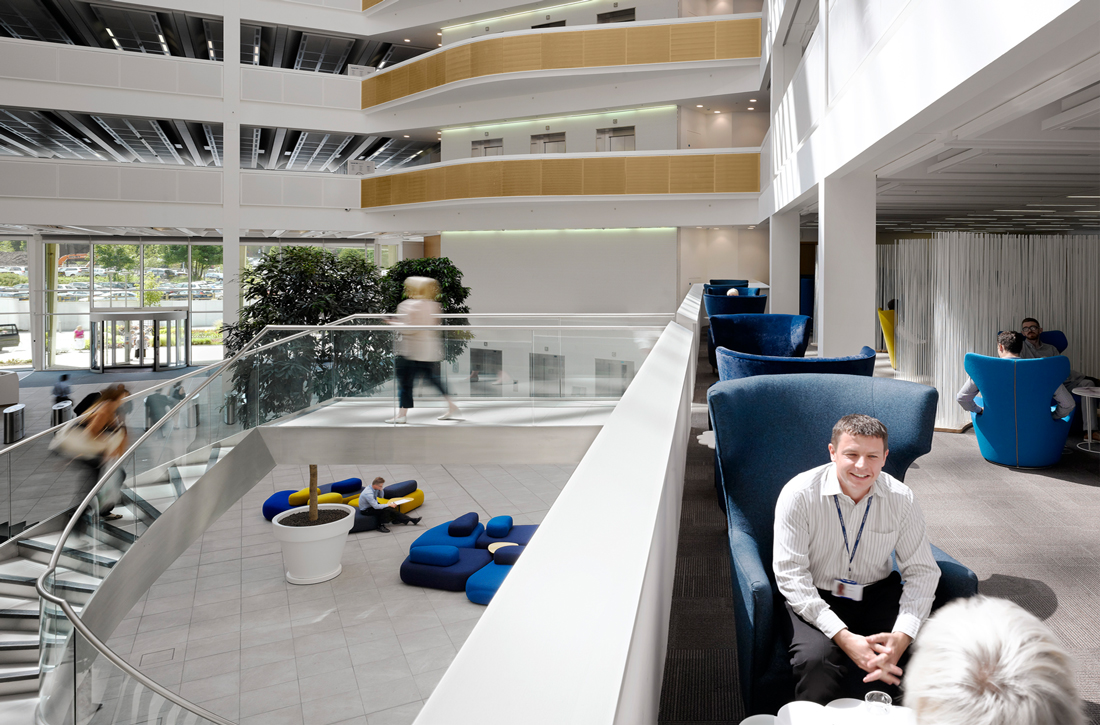 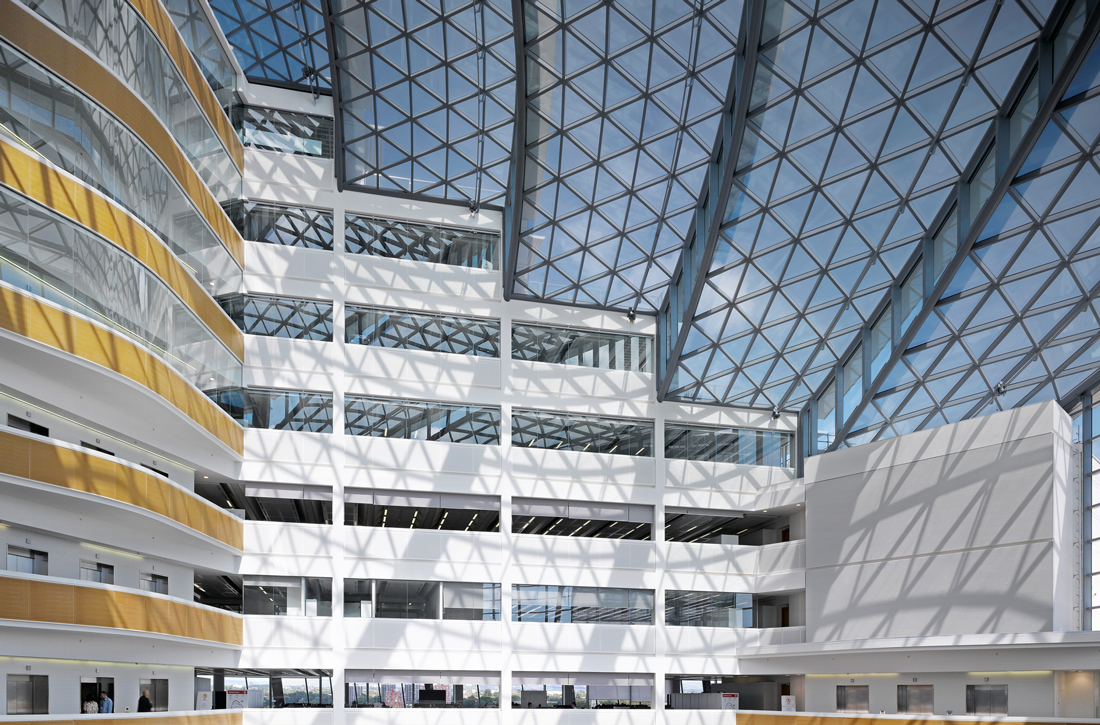 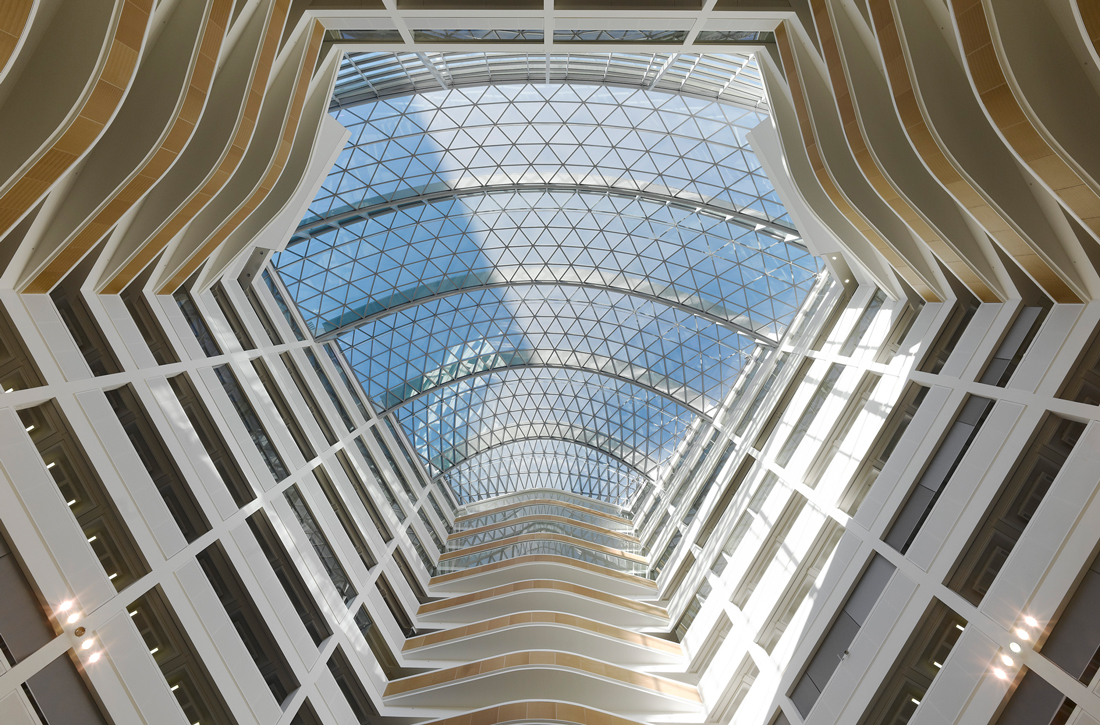 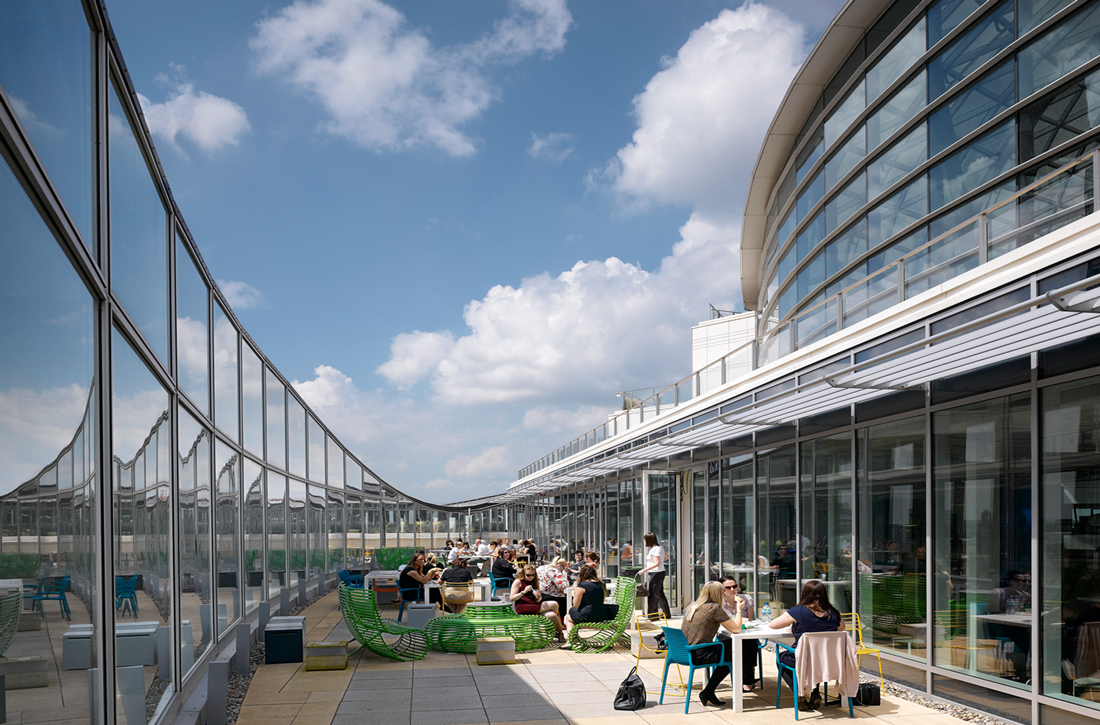 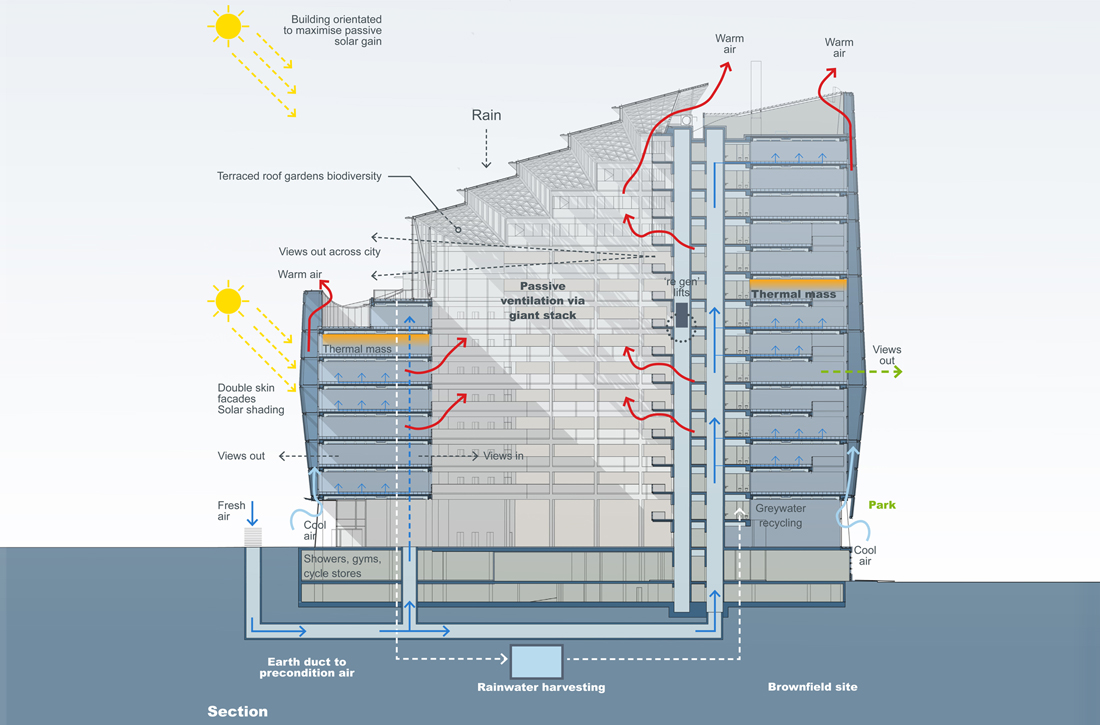 Designed by 3DReid, The Co-operative Group’s new £110 million low-energy, highly sustainable head office is, at 500,000sq.ft, the largest commercial office building in Manchester. It is the highest scoring BREEAM 'Outstanding' building in the UK and brings their 3,500 staff under one roof.

In line with The Co-operative Group’s ethical approach to business, sustainability is embedded as an integral part of the architecture and engineering. The objective of the design was to create a building that is adaptable and flexible in its operation, highly efficient in the consumption of resources, but also economically viable and replicable.

The building has been designed to deliver a 50% reduction in energy consumption compared to The Co-operative’s current Manchester complex and an 80% reduction in carbon. This will lead to a reduction in operating costs of up to 30%.

Ground breaking engineering features include a double-skinned façade to minimise heating and cooling throughout the year and underground concrete earth tubes that provide an amount of free heating and cooling for the incoming fresh air. The thermal mass of concrete is employed again within the building by exposing 300,000sq ft of concrete that forms the ceilings to the office floors. The concrete acts as a thermal sponge, passively soaking up heat and reducing the amount of energy needed to cool the building. Waste air is finally extracted over the balcony edge using the natural stack effect of the atrium thus negating the need for large space-hungry extract risers within the cores. Before being expelled at the highest point of the roof, the air passes through a heat-exchanger that recycles the heat to warm the incoming air in to the offices below.

The Co-operative’s local sourcing and sustainability principles are put into practice in using rape seed from British Co-operative farms to produce the fuel for the building’s CHP power plant. The remaining husks of the crop will be recycled into animal feed. Excess energy can be supplied back to the grid and utilised by the wider NOMA development, with waste energy being sent through an absorption chiller, used to cool the building.

The designers have addressed the issue of global warming and future-proofed the building against predicted weather data for 2050. So the building can cope with a potential 3-5 degree increase in summer temperature and 30% more rainfall in winter. The building’s fabric and environmental systems have been designed to become more efficient as average annual temperatures rise.

Other areas of innovation are the implementation of electrical pool car charging points, fed from the low carbon CHP and the development of a building user ‘App’ which relays real time user information on how the building is performing.

2012 Regeneration and Renewal Award for sustainability

The building is highly innovative and sustainable and is packed with ground breaking environmental and carbon reduction technology. It has already received a design stage BREEAM ‘Outstanding’ rating, scoring 95.16% and has achieved an EPC A+ rating. Designed to operate to a DEC A standard, it is the first building of its scale in the UK to achieve all three standards. It delivers a 50% reduction in energy consumption compared to the Group’s current complex and an 80% reduction in carbon. This will lead to a reduction in operating costs of up to 30%. The energy strategy has been based upon the application of a clear energy hierarchy. This method deals first and foremost with reducing the requirement for energy using effective passive measures then secondly, the efficient use of energy and finally the integration of low or zero carbon technologies. This approach embraces both passive and active environmental strategies and inherently offers best value for money against carbon savings.

MEAN
The massing and orientation of the building are configured to maximise passive solar gains, whilst the double-skin façade and atrium roof are designed to optimise daylight controlled excessive solar gain. Early daylight and sunlight modelling informed the physical parameters of the floorplate and no desk is more than 7m from a window to minimise reliance on artificial lighting. The performance of the building’s fabric has been improved by reducing the U-values , reducing the air permeability and the integration of solar shading. As a result, heat losses through the fabric, air infiltration and the cooling demand are all reduced.
Solar shading within the double-skin façade is achieved through a combination of horizontal ledges (that also serve as maintenance decks) and the glazing mullions (whose overall depth varies from 300 – 600mm depending its the location on the façade).
The ventilation supply air is provided through a series of underground earth tubes that act as an earth-to-air heat exchanger. The atrium, combined with double-skin façade, allows the building to utilise a low-pressure ventilation system, significantly reducing the extent of mechanical ductwork risers as the atrium functions as a large air plenum to extract air from the building. To dampen the fluctuations in indoor temperatures as a result of varying internal and solar gains, the thermal mass of the pre-cast concrete soffit is exposed to the occupied space. Coupling the thermal mass with a night cooling control strategy helps to reduce the requirement for supplementary cooling, reducing the annual and peak demand.
The design was tested against predicted climate data for 2050 and the conclusions influenced the design such that the fabric of the building and it’s environmental systems can cope with the likely changes, and actually become more efficient as average annual temperatures rise since there is a greater heat differential between the air, the ground and the building’s passive systems.

LEAN
The energy required to service the building has been reduced through the use of energy efficient systems.
The performance of the building’s Heating, Ventilation and Air Conditioning (HVAC) systems have been improved by increasing the efficiency of the gas boilers and electric chillers. The use of the heat recovery and waste heat reclamation from the Combined Heat and Power (CHP) is also instrumental in reducing energy demand.
The artificial lighting is one of the major consumers of energy within the building. A series of measures have been adopted to reduce the energy consumed, including using highly – efficient luminaires, painting the concrete white to increase light reflectance, occupancy detection using PIR sensors to the open plan office areas and the toilet areas, and dimmable and daylight control added to all perimeter office areas, breakout areas, call centre areas and meeting rooms. The BMS is capable of closely controlling the environment within the floorplates down to a 3m x 3m grid to tailor the energy demand in response to localised patterns of use and activity.

GREEN
After the building’s requirement for energy had been reduced, by applying a number of Mean and Lean measures, a number of Low or Zero Carbon Technology options were explored.
A pioneering pure plant oil fed combined heat and power system is used to generate a low carbon source of electricity, with the waste heat used to heat the building or to provide cooling using the absorption chillers. It contains two 400kw engines capable of running on multiple fuels. Rapeseed oil, grown on the Co-operatives own farmland, will be used to run the engine making it a true closed loop system. It supplies the complex using a tri-generation approach and can export excess energy back to the grid, excess heat in to NOMA with the waste heat being sent through an absorption chiller which is then used to cool the building and its I.T. systems. Other notable low carbon engineering techniques utilised include, the use of chilled beams and concrete coffers to provide natural cooling, regenerative motors in the lifts and an innovative EMS system.

The building has also been designed to have very low water consumption through the use of rainwater harvesting, greywater re-use and low water consuming fittings.
The client seized the opportunity to introduce a number of business changes to ensure colleagues and the community surrounding the building became more environmentally aware and that the building is used in a sustainable way, including creating a green travel plan that has reduced single occupancy car journeys by 10% and significantly increased cycling and walking to the site A programme of personal carbon usage tracking has been piloted to place sustainability at the core of colleague behaviour to ensure the building is used as it has been designed.
A teaching resource has been created as part of The Co-operative Group’s Green Schools Revolution for 2,500 primary schools to help them understand how the building works and why it is so green. BRE innovation credits were awarded for the development of a smartphone ‘App’ that explains how the building works and for the inclusion of electrical charge points within the car park for electric vehicles.